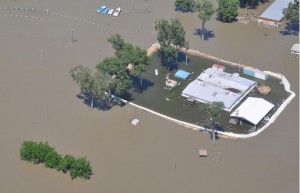 Iowa and Nebraska have left the Missouri River Association of States and Tribes, known as MORAST. Remaining members are meeting this week in Kansas City for the first time without Iowa at the table.

The group was made up of seven states in the river basin, along with several Native American tribes. Now, only five states remain.

Gipp says, “We didn’t think that the lower basin states were being represented very well by that organization.”

The executive director of MORAST said this week Iowa is welcome to rejoin the group at any time, but that appears unlikely.

Gipp says Iowa decided to leave in large part because of a host of issues that arose from the record flooding on the river last summer.

“It was determined by the governor of Iowa that we would withdraw simply because we didn’t think that we were being listened to as far as using the controls that we have on the Missouri River for interest in the lower basin states,” Gipp says. “It got people’s attention and hopefully, we can work forward from that aspect.”

Gipp says despite leaving the association, the state will continue to cooperate with other states in the Missouri River basin, just not through MORAST.

“All of the states have an impact and a contribution,” he says. “It’s going to be important to continue to talk with the upper basin states about what’s good for the entire Missouri River stem, because we certainly can’t go it alone.”

The group’s website says it was formed “to help resolve issues of concern to the basin states and tribes, to serve as a forum to foster communication and information exchange among the member states, tribes and various other governmental units, and to facilitate the management of the natural resources of the Missouri River Basin, including water resources, fish and wildlife while considering the impacts to the economic, historical, cultural, and social resources.”