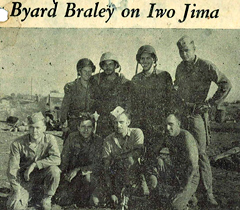 The Democrat from Waterloo joined 12 World War Two veterans as they returned to the island for the first time since the famous Battle of Iwo Jima in 1945.

Braley’s late father, Byard Braley, was a Marine who fought on Iwo Jima. Braley says he was at a banquet with roughly 350 people the night before the group’s trip to the island and he sat at a table with a woman who’s father also served during World War Two.

“She pointed to a picture of her dad with his address in Perrysville, Ohio and his unit that he served in — and I nearly fainted when I saw it was the exact same artillery unit that my father served in,” Braley told reporters in a conference call this week.

The woman loaned Braley a photo album that her father kept. “I took it back to my hotel and was shocked, after 67 years, to open it up and see a picture of my dad in it,” Braley said. Byard Braley, who was just 18 years old when he landed on the beaches of Iwo Jima, died in 1981 at age 55 after suffering a heart attack.

In addition to Congressman Braley, one other Iowan took part in this month’s trip. Marine Corps veteran David Greene of Waterloo spent a month fighting at the Battle of Iwo Jima.

Braley said the trip was an “emotional and amazing” experience. “To go up to the top of Mount Suribachi and see the spot where Harold Keller, from my hometown of Brooklyn (Iowa), was part of one of the initial flag raising parties – and he slept under that flag the night it was raised – was an incredibly emotional and rewarding experience for me,” Braley said. “It also brought home the enormous sacrifice that we ask men and women serving our country in the military to make.”

The trip to Iwo Jima was organized by the nonprofit Greatest Generations Foundation.