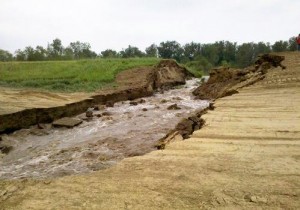 Top brass in the U.S. Army Corps of Engineers have wrapped up a spring inspection tour of the six dams along the main stem of the Missouri River.

All of the dams had to release record amounts of water last spring and summer as the Corps dealt with record levels and historic flooding.

“We’re making good progress in the assessments,” General McMahon says. “We have money flowing at one dam. We have construction crews going out that we actually saw at other dams, there was evidence of construction so, the process is working. That’s always good to see. We’ve got a lot to do and we don’t know all that we have to do because we haven’t concluded all of the assessments that we need to do.”

McMahon says there are critical issues at some of the dams.

“There are, but they’re being addressed, as you would expect them to be,” he says. “We have a good scheme of what needs to be done first and those things are being done but no surprises in that regard.”

There were several levee breaks downstream of Gavins Point Dam in Iowa, Nebraska and Missouri. McMahon says most of those compromised levees have had at least temporary repairs.

“There are other places in northwestern Missouri where we’ve got a lot of work to do but that’s being held up by different aspects of the process,” he says. “We’ve got to get easements, we’ve got to get land and those are responsibilities of the local folks but all of that’s unfolding as we speak.”

McMahon says another issue for the Corps will be regaining the trust of the people who live along and near the river.