You are here: Home / Agriculture / Governor gets animated in denouncing “smear campaign” against beef product (audio) 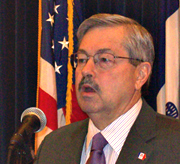 Iowa’s governor is asking for a congressional investigation of what he calls the “smear campaign” against lean, finely textured beef. Critics are calling it “pink slime.”

Governor Terry Branstad suggests not only vegetarians, but “Hollywood”, “some celebrity chefs” and the “media elites” are behind what he characterizes as an attack on the beef industry.

“We need to get to the bottom of this,” Branstad said this morning. “We need to find out who’s behind it and why they’re doing it.”

“This woman has put on her website a lot of inaccurate, false, smear information,” Branstad said. “We need to expose this.”

Last Thursday Branstad and the governors of Kansas and Texas toured the South Sioux City plant that makes lean finely textured beef. During a news conference after the tour, Branstad was asked by an ABC News reporter if the $150,000 in campaign donations Branstad received from the plant’s owners had anything to do with his support of the company’s product. Four days later, Branstad is still simmering about that question from ABC’s Jim Avila.

“When we exposed the facts, instead of accepting the facts and apologizing for the smear, the individual levies a personal attack against the people that are exposing it, including a woman who lost her son to e-coli,” Branstad said. “That is about the lowest thing I’ve ever seen.”

The reporter asked a woman who heads the “Stop Food Borne Illness” group if her support of lean, finely textured beef was linked to the $250,000 Beef Products, Incorporated owners had donated to the group.

On Friday Branstad sent a letter to Iowa school superintendents, asking them to keep using products that contain the lean, finely-textured beef additive.

“I’m going to send a letter today to every governor in America, encourage that they do the same thing,” Branstad said. “…Tell their superintendents, ‘Don’t be bulled by this smear campaign. Don’t let this misinformation persuade you to do the wrong thing,’ and yet we have a smear campaign going on against a product that is healthy, that is safe and has, frankly, helped combat some of the issues in the past such as e-coli and salmonella.”

Branstad spoke of the issue this morning during his weekly statehouse news conference. The governor repeatedly pounded the lectern as he spoke, vowing the “fight” to defend the beef additive had “just begun.”

“To counter what Hollywood and the media elites and the people that are spreading these misinformation and this smear campaign, we need to expose who they are and why they’re doing it!” Branstad said, his voice rising with each phrase until even he realized the escalation. “Other than that, I don’t care a lot about it.”

AUDIO of Branstad’s remarks on this issue.

The lean, finely-textured beef product is made from the trimmings left over after beef carcasses are cut into steaks and roasts. It’s generally used as an additive in ground beef to lower the fat content to something in the range of 90 percent lean. Many national supermarket chains have discontinued selling beef products with the additive. According to U.S. Ag Secretary Tom Vilsack, “hundreds” of U.S. school districts have asked the U.S.D.A. for permission to forbid the product from school cafeterias.