You are here: Home / News / All-clear after statehouse lockdown due to “very threatening letter” (audio)

The Iowa capitol building was under lock-down for almost four hours late this afternoon and early evening until tests revealed a “suspicious substance” was not dangerous.

State Representative Ako Abdul-Samad of Des Moines received “a threatening letter” that contained a white powder — and the letter was opened at his desk on the House floor.

“The white powder came out, got all over my clerk and his clothes,” Abdul-Samad told reporters during a brief news conference at about eight o’clock Tuesday night. “I swallowed some of it and it got on my hands.”

Abdul-Samad was reluctant to discuss details of the letter.

“It has now become a very serious legal matter,” he told reporters.

Debate in the House was suspended shortly after 3:30 p.m. and HazMat crews arrived to conduct tests about an hour later.

Tests revealed the powder was not dangerous. However, neither Abdul-Samad nor the head of capitol security would reveal what it was.  Samad, his clerk and a few others who had been close to the powder were huddled in the entryway to the House, in a small area which had been used as a coat room. 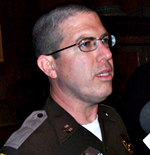 “It’s certainly a good peace of mind for these individuals to find the substance is not harmful,” Sergeant Logsdon told reporters.

The letter, which was unstamped, was apparently hand-delivered to the legislature’s mail room, according to Logsdon. It has been turned over to investigators with the Iowa Division of Criminal Investigation.

Michael Dekota McRae, Abdul-Samad’s clerk, told reporters the powder “went in a lot of directions” when he first opened the envelope.

“At first I didn’t know what was going on. You know, to get something like that in the mail — it was quite shocking at first and it’s still got me little shaking right now,” McRae said. “But it’s good to know that the substance was not dangerous.”

Abdul-Samad told reporters he has gotten hostile telephone calls before during his tenure on the Des Moines School Board and in the legislature, but this is the first time he’s received a letter like this.

“I can tell you it was a very threatening letter, you know, and everybody’s taking it very seriously,” Abdul-Samad said.

Emergency vehicles were positioned outside the statehouse for hours and crews set up a decontamination area, just in case the tests had revealed the powder was a hazard to humans. Police tape blocked the exits at the statehouse, as both legislators and visitors inside the capitol were prohibited from leaving until the all-clear was given shortly before eight o’clock.