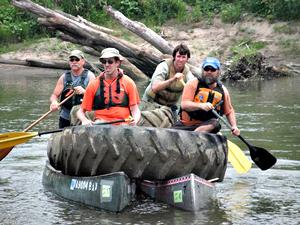 Volunteers haul away a tire during Project AWARE.

Volunteers will spend one week cleaning up 93 miles of the Iowa River in north-central Iowa later this summer.

Brian Soenen is the organizer of Project AWARE, which stands for A Watershed Awareness River Expedition.

This year’s expedition marks AWARE’s 10th year. Soenen says the decision to focus on the Iowa River between Dows and Marshalltown was made primarily by the volunteers who do the dirty work.

“And we also thought, with the 10th year of this event, what better way to celebrate that than to do a clean up on our namesake river?” Soenen said. The Iowa River clean up is scheduled to take place July 7 to 14.

Volunteers travel down the river in canoes or kayaks and pick up trash along the way. One of the more common items pulled from the water “Last year, when we were up in northeast Iowa on the Turkey River, volunteers pulled over 600 tires from the river bottom,” Soenen said.

“We typically see a lot of tires, a lot of barrels and a lot of metal.” Soenen helped launch Project AWARE in 2003. In the past nine years, more than 2,150 volunteers from across the state have cleaned up more than 700 river miles, removing more than 180 tons of trash. Soenen said around 65% of that trash has been recycled.