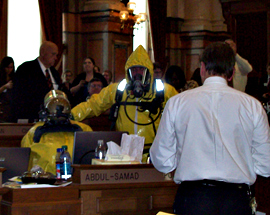 HAZMAT crews examine a substance in the Iowa House.

At nearly a quarter past five o’clock, the head of capitol security, Sergeant Mark Logsdon was invited to address the members and others who were gathered in the House chamber.

AUDIO of announcement from Logsdon, followed by a few words from House Speaker Kraig Paulsen.

AUDIO of Paulsen’s previous announcement, at about 4:45 p.m., as sirens were sounding outside the statehouse.

AUDIO of announcement made on the statehouse public address system shortly before five o’clock.

Here is what visitors in the statehouse heard: “This is Post 16. We request people stay in the building until further notice. We will advise you when you are allowed to leave.”

The HazMat team arrived in the House chamber at about 5:30.