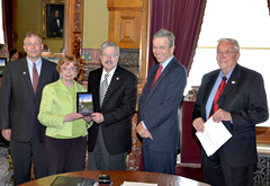 The annual Keep Iowa Beautiful Awards are being presented to cities, companies, schools and individuals who’ve helped to enhance the state’s cleanliness and attractiveness.

“I got a letter in the mail about a month and a half ago stating that Webster City had won this award,” Mayor Adams says.

“I thought it was going to be several cities that were going to get this and didn’t give a whole lot of thought to it so I was kind of ashamed when I found out how important it really was.”

The award is designed to recognize people and organizations that go the extra mile to make Iowa’s communities more attractive places to live, work and raise families. Adams says the city’s beautification efforts started with a pair of welcome signs.

The organization award went to Anamosa High School for leadership and creativity in their community with beautification efforts. The awards kick off the month of April as Keep Iowa Beautiful Month. Learn more at: “www.keepiowabeautiful.com“.