You are here: Home / News / Popular aquarium reopens after six months of renovation 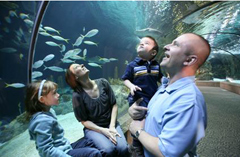 The aquarium at the Henry Doorly Zoo.

One of the region’s most-popular tourist attractions is reopening this week after a 6-month, $6-million renovation project. The Scott Aquarium at the Henry Doorly Zoo  in Omaha has undergone significant changes, according to zoo director Dennis Pate.

“We’ve added 10 new exhibits, about 150 new species of fish and about 500 new specimens,” Pate says. “There is more for kids to do.” The aquarium was redesigned to make it more crowd-friendly, while keeping favorite areas like the 70-foot shark tunnel and the penguin exhibit that features 85 of the unusual birds. The layout was changed to reduce bottlenecks and to create more space for walking.

“We’ve just taken some angles out to make it more curvy,” he says. “Spots where people had traffic jams we’ve opened up a little bit more to help the flow.” Pate says they’ve also added a light and sound system to add to the underwater experience.

“So the deep ocean, you may hear whale calls,” he says. “At the shore exhibit, you may hear lapping waves and on the rocky coast area, you may hear buoys with bells on them.” The aquarium first opened in 1995.