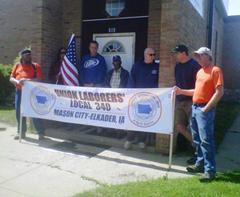 The head of the Iowa AFL-CIO joined local labor leaders and elected officials Thursday in Mason City to tout what he says is a positive impact from President Obama’s policies on manufacturing growth and job creation in the state.

Ken Sager says Iowans have a clear difference between Obama and the strategy of the likely Republican nominee Mitt Romney.

Sager says the Obama administration has been helping to create jobs over the last two years. He says for 32 straight months, “We’ve been creating new jobs and manufacturing jobs in this country, and those kind of jobs are the kind of jobs that people raise families on and contribute and participate in the American dream.”

Sager says when Obama took office, the U.S. was losing more than 800,000 jobs a month which was unsustainable and putting a kink into the economy. Sager says Mitt Romney would not be the best choice to keep the U.S. economy pointed in the right direction.

He says, “We need to make sure that people understand the clear difference between Obama and the likely nominee from the Republican Party who was heard last month telling a humorous story about how his father had shipped jobs from Michigan out of state. Frankly, I don’t see no humor whatsoever in hurting working families in the communities that they live in. It’s unacceptable to have that kind of an attitude about America’s working class and maybe that’s part of the problem we have right now.”

Sager’s comments come after Vice President Joe Biden made is second stop in a month in Iowa last week to tout the Obama administration’s support for manufacturing.