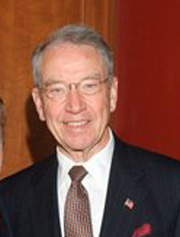 In a conference call with reporters this morning, Grassley did not say he’d apologize for the comment but did say he should’ve found a better way to express himself.

“You know, it wasn’t a very diplomatic way to say what I was trying to say because we all know that the president is an intelligent person,” Grassley said. Grassley, a Republican, was referring in his tweet to the president’s comments last week when Obama said it would be “unprecedented” for the U.S. Supreme Court to rule against the health care law.

Grassley said Obama is certainly well-versed in the landmark court case known as Marbury v Madison. In that ruling from 1803, the U.S. Supreme Court established that it could declare a law that was enacted by Congress as unconstitutional.

“And then he gives a speech eight or nine days ago where he implies the Supreme Court wouldn’t dare declare an act of Congress unconstitutional because it was passed by a majority of Congress,” Grassley said. “He just simply knows better.”

President Obama is a Harvard Law School graduate and he taught constitutional law at the University of Chicago. “He made comments that shouldn’t have been made,” Grassley said of Obama’s remarks. “I’m sure he knows they shouldn’t have been made. It looks like he backed off a little bit, but I think a president has a responsibility to show to the American people how our system of government works and show respect for that system of government and he didn’t do that.”

David Axelrod, the president’s chief strategist, sent out his own tweet, warning the senator that perhaps a six-year-old had hijacked Grassley’s Twitter account to embarrass him.

Here’s the text of Grassley’s original Tweet from Saturday: “Constituents askd why i am not outraged at PresO attack on supreme court independence. Bcause Am ppl r not stupid as this x prof of con law”