The finishing touches are going on new exhibit at the State Historical Society of Iowa that is part of the events marking the 150th anniversary of the Civil War.     Radio Iowa’s Dar Danielson has the first of a two-part preview. Audio 1:18 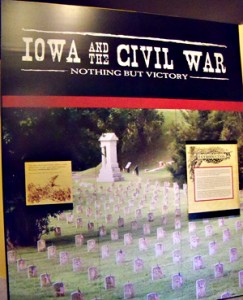 State Historical Museum director Susan Kloewer says the exhibit came out of discussions by the Iowa Civil War Sesquicentennial Committee, and they developed a concept and plan to focus purely on Iowa’s role in the war. Iowa probably isn’t the first state that comes to mind when you mention the Civil War, but museum history curator Jack Luftkin says the involvement of our state was substantial.

“Iowa contributed thousands of troops, 50 some units, regiments or utility batteries. And sure paid a dear price, about 8,000 killed, which was a big percentage for the population at that time,” Luftkin says. Luftkin says the exhibit shows several issues from the Iowa perspective.

“It’s not like linear in chronological order…like a book would be. And the subjects are really those that would have been from Iowa’s perspective, what was important to Iowa and Iowans, politically or socially or militarily or economically…” Luftkin explains. “So you start and you walk in and you see what Iowa was like in the 1860’s — sort of get a sense of what would have been found in people’s homes, what kind of jobs they would have had, that kind of thing.”

There’s a variety of the tools of war at the time on display, from cannons, rifles and handguns — to military uniforms and tattered battle flags. Luftkin says all the artifacts are part of the state’s collection. New technology is also featured along with the 150-year-old items, including a large video touch screen where kids can sit and teachers can move through information on various topics.

Kloewer says the idea is to offer an exhibit that people of all ages will enjoy. “Iowa and the Civil War, Nothing But Victory, opens on Saturday April 14th, and along with our exhibition galleries we are also going to be offering a robust calendar of different programmatic offerings, whether it’s a speakers series, lunch and learn series and different hands-on demonstrations,” Kloewer says.

The exhibit is free and the Historical Society is open seven days a week. For more information on the exhibit go to: www.Iowahistory.org.