You are here: Home / Business / Iowa remains second in the nation for wind power 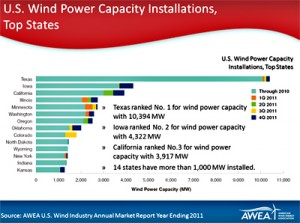 Iowa remains second behind only Texas in wind energy production according to an annual report released today by the American Wind Energy Association.

The report shows Iowa has between 6,000 and 7,000 people working in the wind industry – more than any other state.

That statistic came as a bit of a surprise to Harold Prior, executive director of the Iowa Wind Energy Association. “Our estimates had been about 5,500 full-time jobs, so that did catch my eye,” Prior said. In 2011, the report shows Iowa generated 18.8% of it’s total electricity from wind power. Prior said Iowa just recently became the first state in the nation top 20%.

“That’s a fluctuating number because of the strength of the wind actually producing electricity,” Prior explained. “We had a pretty placid August and September, so we’re still recovering a little bit from that. We dropped a little bit below 20% because we just didn’t have very good winds in late summer and early fall.”

Only South Dakota, at 22.3%, topped Iowa in the category of percentage of electricity produced from wind. Prior said Iowa experienced a 27% increase in installed wind capacity last year and the industry will be even bigger by the end of this year.

“By the time all of the projects we are aware of are finished…Iowa’s installed capacity should increase fairly dramatically in 2012. There’s a big rush to get all of these projects completed before the expiration of the current Production Tax Credit,” Prior said. That tax incentive for the development of wind energy projects expires at the end of this year. Iowa’s congressional delegation has pushed for a extension of the tax credit, but at least two efforts to attach the wind energy credit to other tax bills have failed.