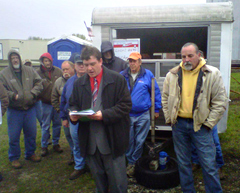 It’s been over eight months since more than 1,300 American Crystal Sugar workers were locked out of their jobs at plants in Mason City as well as plants in Minnesota and North Dakota over a contract dispute.

Today, workers locked out from the Mason City plant were presented checks by the Iowa Federation of Labor and the North Iowa Nine Labor Council to help them during the lockout.

Charlie Wishman, the secretary/treasurer of the Iowa Federation of Labor, said the lockout of the 23 workers at the Mason City facility has an impact on the local economy.

“This community cares about these workers,” Wishman said during a news conference this morning outside the plant. “It’s my hometown and I believe these workers deserve better than how Crystal Sugar has been treating them.”

Tom Johanns is president of the local union that represents the workers.

“There’s no negotiations taking place at this time. We’re at a standstill,” he said. “There’s no meetings scheduled, so here we sit.”

Mike Herman, president of the North Iowa Nine Labor Council, also spoke at this morning’s press conference, held near what workers call the “lockout shack” outside the plant.

“There’s a lot of people all over the state, all over the country…they might not be here today, but they are standing with them out here today,” Herman said. “I hope they can come to an agreement and get back to work, and I’m sure that’swhat they’re hoping for, too.”

Since the lockout, the company has been using replacement workers to operate the plants. Company and union officials met informally in January, but talks ended with the two sides firing off publicly about one another.