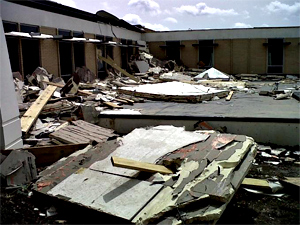 Creston’s only hospital was hit by Saturday night’s tornado.

The Greater Regional Medical Center was heavily damaged and all of the patients were transferred as chief Nursing Officer Gwen Buck explains: “We had our inpatients all transferred to Allegiant in Corning. Some ER patients came in and we transported them out, those all went to Des Moines.”

Union County Emergency manager JoAnn Duckworth says her main goal is to keep people safe, as safe as possible. “I think we all did a good job,” Duckworth says.

“The response has been tremendous. With our limited resources, we had neighboring counties here in just about as quick as you could blink an eye.” Six people were injured in the Creston tornado, one of them critically.

Creston City Council member Loyal Winborn says he and his family had a very close encounter with Saturday’s tornado as it picked his feet up off the ground and he clung to a closet door for his very life. Winborn took a reporter on a tour of what’s left of his home after it was demolished by the twister — which arrived practically in the blink of an eye.

“The kids were in there watching NASCAR and the weather radio went off saying there was 70 mile-an-hour winds about seven miles outside of town,” Winborn says. “We were getting our shoes to go over to the neighbors’ house because they have a basement but then my ears started popping, the barametric pressure changed so fast, I felt the house lower and I screamed for everybody to run to the closet.”

He says he and his girlfriend only had seconds to react and to move the two small boys to safety. “We got the kids in the closet,” he says. “Stacy literally picked up Evan and threw him in. I threw Alexander in. Stacy got in and as I tried to get in behind them, my feet left the ground. I grabbed onto the door and was trying push them down. Some random door flew in and hit me on the back of the head.”

Loyal said he suffered a concussion from that blow. He realized quite quickly his house was gone and they needed to get out right away, as it was no longer going to be shelter from the storm. “I looked up and the roof was peeled off,” Winborn says. “All’s I could see was pure white above, nothing, just horrendous noise and nothing but super-bright white light and then it was all over. The house slammed down. It felt like I was 5,000 pounds when I hit the ground on top of them. We didn’t have much time because then, with no roof, debris just started raining inside the house.”

He got the two boys and Stacy to his neighbors’ basement. Among the debris they later found inside the wrecked home was a large birdfeeder mounted on a 4-by-4-inch post on the kitchen floor near the fridge.