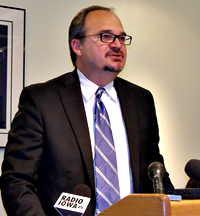 The lawyer representing the African-Americans who sued the state saying they were discriminated against in hiring and promotions for state jobs says today’s court ruling is a setback, but they will continue pushing their case.

Polk County District Court judge Robert Blink ruled there was not proof that the state systematically discriminated against African-Americans in its hiring policies.

Attorney Thomas Newkirk says the judge failed to see their argument that Iowa’s law covering discrimination should be expanded.

“This is an historic case because it tried to approach discrimination from a different perspective. It tried to explain how bias works, how extensive it is, how often it is in the room in decision making,” Newkirk says.

“It is an historic case because we took a different path. We put aside the traditional game of blame, allegations of racism, guilt and shame and simply asked the state to take responsibility for its broken system and the likely affect it would have for people who do not look like me.” Newkirk is white. He says there was some agreement with the arguments they presented but the judge failed to follow them all the way through.

“The court found what our experts found, that 70 to 80% of people in the United States have implicit favoritism for people who look like me. They found that three out of four decisions where people make decisions about African-Americans are going to be affected by race. What the court found..I believe is that Iowa is somehow different than the rest of the United States.”

Newkirk says the goal of the lawsuit has always been to change the system. “If we had in fact won today — the judge had ruled in our favor — I wouldn’t have stood up here and said we won. I would have said we would not win until the Attorney General of Iowa and the governor, stand up here with us and take responsibility for the broken system, its likely impact upon persons of color and other minorities,” Newkirk says.

“And to work with us to fix it for the benefit of all Iowans, not only the white Iowans who pay taxes, but the African-Americans who pay taxes as well.” Newkirk says the next step is to go to a higher court.

“We will file and appeal with the hope of reversing the court’s ruling and getting the Supreme Court of Iowa…to realize that a broken system benefits people who look like me. And that the law prohibits a system that provides the benefit of the doubt for someone who looks like me,” according to Newkirk.

Governor Terry Branstad and Lieutenant Governor Kim Reynolds touted changes in hiring practices last September that they said made the process more centralized and addressed the issue. But Newkirk says the state has not changed the flaw rules that lead to the problem.

“They’ve never once taken a fundamentally new approach to how bias works, how it affects decision making, and the extent that it is in the room when people who look like me make decisions about people who look like my clients,” Newkirk answered in response to a question about the administration’s actions.

The case involved 29 named members and potentially 6,000 more who were involved in decisions about state jobs from 2003 through 2007. A half dozen of the members of the suit were present for Newkirk’s news conference today.

Wilbur “Butch” Devine Junior of Waukee says he had been an employee of the state for 27 years and was denied a promotion. “I got involved in this lawsuit primarily because I wanted something for our young children to come and have an equal opportunity to compete. I didn’t want anyone to give us anything, I just wanted to have a level field to play on,” Devine says.

He was asked if he was angry about the ruling, and said no. “Obviously I don’t go along with the ruling, but we shall keep on fighting,” Devine said.

The judge analyzed the facts and legal theories of the class action brought by the plaintiffs and found that they failed to prove their case. The district court ruled that their legal claims were “not recognized by the law,” and as a result the taxpayers would not be forced to pay class action damages.

“The core of this case involved Iowa agencies deciding which applicants to interview based on submitted applications,” Miller said. “In some cases, these agencies received hundreds of applications. Applicants did not indicate their race. In most cases, those in state government who were making hiring decisions were making those decisions throughout the process without knowing the race of the applicant.” At issue in this case were employment decisions relating to nearly 500,000 applications, submitted by nearly 100,000 applicants, for more than 20,000 merit system jobs. These jobs fit into a complex mosaic of job (700) and pay (24) classifications and most-nearly 85%-were covered by collective bargaining agreements. “The plaintiffs had an expert who testified that even if the agencies didn’t know the race of the applicants, that somehow in a subconscious way they did know and discriminated against African Americans,” Miller said. “Judge Blink rejected this claim as clearly as he should have.”