You are here: Home / News / Former Iowa governor’s advice? “Get it done.” 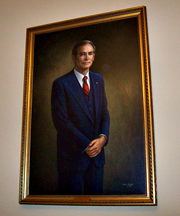 Former Iowa Governor Robert Ray visited the state capitol Tuesday, stopping to see his portrait which now hangs in a private office for Republican leaders in the Iowa House.

“It’s a nice picture, isn’t it?” Ray asked a crowd that gathered around to see his reaction.

The portrait was painted by a distant relative of Billie Ray, the former governor’s wife.  “And then we had it in our house for a while,” she said, but the couple decided the nearly-life-sized portrait was just too big for their home, so they donated it to the State Historical Society.

Representative Jeff Kaufmann, a Republican from Wilton, is the one who chose to hang Ray’s portrait in the private conference room.

“All of us legislators, dealing with all these problems, sitting under your picture at this table because we do a lot of planning here, what advice would you have for us?” Kaufmann asked Ray.

Ray had a simple reply: “Get it done.”

Ray, who is now 83 years old, served 14 years as Iowa’s governor and he suggested legislators can be somewhat fickle at times. 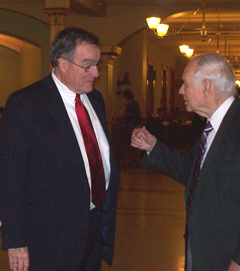 However, Ray cautioned that law-making is not as simple as it looks.

“It seems easy to us on the outside, like, ‘Why don’t they just do this or do that?’ Ray said. “But it’s not that easy at all.”

Ray left the governor’s office in January of 1983.

“What I always told my staff was, when we would sit down in the conference room and discuss an issue, ‘Let’s talk about the issue, not what it means politically or who gets what advantage. Let’s decide what is right. Then, once we decide that, let’s go about getting it accomplished,'” Ray said. “It worked very well for me.” 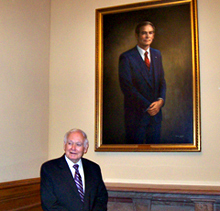 Ray and his wife went to the Iowa House early Tuesday afternoon to listen to the farewell speech of Republican legislator Scott Raecker who is director of the Institute for Character Development at Drake University.

Ray served as an interim president of Drake, where he earned his law degree in 1954. Ray served as chairman of the Republican Party of Iowa in the 1960s before winning his first term as governor in 1968.