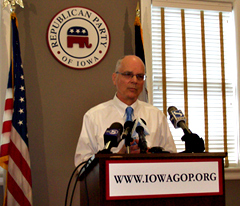 The leader of a committee examining the 2012 Iowa Republican Party Caucuses suggests there’s a bit of public relations work ahead to boost the national view of these neighborhood meetings.

“The bad news is that the Caucuses have been characterized by others as a fiasco, as a clown show. Some out-of-town media have characterized it that way,” Schickel said today during a news conference at Iowa GOP headquarters.

“The good news is that on Caucus Night we had 100 percent of precincts reporting.”

Back on January 3, Mitt Romney was declared the winner of the Iowa Caucuses, finishing just eight votes ahead of Rick Santorum. But later in January when Republican leaders at the county level were to submit the official party paperwork to GOP headquarters in Des Moines, that tabulation indicated Santorum was the victor, by 34 votes. Plus, the paperwork for a handful of precinct results was never submitted.

“I think we did 95 percent of everything right, but we did make some mistakes as well,” Schickel said. “We have to look at those mistakes, acknowledge them, review them and fix them — and that’s what we intend to do as a committee.”

The Caucus review panel will hold public meetings in Cedar Rapids on May 30 and in Sioux City on June 25.

Caucuses in other states have come under scrutiny as well following questions about results and low attendance. Iowa would almost certainly lose its status as the first test in the presidential campaign if it held a primary, run by local election officials, rather than a caucus which is run by party volunteers.

“By and large, our (Iowa) Republicans, Democrats like the process very much, but we can improve it because we have to remember that these are community meetings in 1774 precincts and we do have other business to discuss — our platform, electing delegates,” Schickel said. “The presidential preference test is part of that. That’s obviously very important.”

Schickel said one of the goals of the task force is to ensure Iowa gives all presidential candidates, regardless of the size of their campaign bank account, a fair chance to compete here.