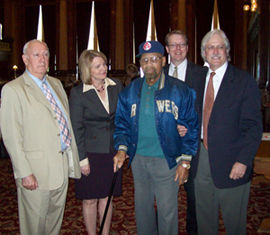 The Iowa Senate has passed a resolution urging the sports writers who vote to elect people to the Baseball Hall of Fame in Cooperstown, New York, to give the honor to an 88-year-old Cedar Rapids man.

Art Pennington earned the nickname “Superman” during his years in the Negro Baseball League, but he never was called up to play in the Major Leagues.

“At that day there was still prejudice…but I didn’t think nothing of it,” Pennington told reporters in Des Moines this morning, with a laugh. “See, grandaddy was a white fellow and he told me the troubles I was going to have.”

State Senator Jack Hatch paid tribute to Pennington during a speech on the senate floor.

“The man is an American hero to thousands of children and to a community that recognizes that…through all this discrimination, Art Pennington put that aside,” Hatch said, “was a civil leader in his town.”

Pennington started his baseball career in the 1940s.

“While Art Pennington played with the greats, had a (batting) average in a couple of years of over .350…the fact that he married a white woman was unacceptable to the major leagues of the 1950s,” Hatch said.

Pennington pose for photos and signed autographs for senators during his statehouse visit.

“They all haven’t forgotten me,” Pennington said. “…I played against all the great ones – DiMaggio, all those guys.”

Pennington also played professional baseball in Cuba and Mexico. After retiring from baseball, Pennington worked at Rockwell Collins in Cedar Rapids for 25 years. Pennington’s Cedar Rapids home was struck by flooding in 2008 and he lost much of his baseball memorabilia.