You are here: Home / Crime / Courts / NAACP says state has failed to act on recommendations to improve hiring practices (audio) 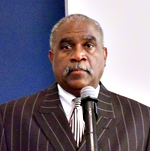 Members of the NAACP said today they want the state to take action to improve hiring practices in the wake of Tuesday’s court ruling that found the state was not arbitrarily discriminating against African-Americans in hiring and promotion policies.

Reverend Keith Ratliff, the president of the Iowa/Nebraska NAACP State Conference, talked about the ruling at his Des Moines church.

“In my humble opinion, what you’re telling African-Americans in state government in regards to state hiring and promotion practices — is your lives don’t count. What it says to me is that this case has been about how not to burden the state with a possible 71-million dollar lawsuit, and not about justice for Iowans who have received an injustice,” Ratliff says.

He says the ruling sends a message. “If I were a young, or early middle-aged African-American I would not, I would not come to this state to seek employment in state government,” Ratliff says. “Because its state practices do not support a fair playing field for African-Americans.”

Ratliff says the ruling is particularity disappointing because the NAACP worked with a state task force and issued a report back in 2007 with 10 recommendations to improve the hiring practices. Linda Carter-Lewis is the former president of the Des Moines chapter of the NAACP.

“We felt very strongly that this case was going to bring about the change that is needed for all our citizens to give everybody a fair opportunity,” Lewis says. “Not just those who are interviewed and not given a chance or not given a chance or not given an interview. But for those who are working for the state and passed over for promotion after promotion. Ignored when they seek an opportunity to transfer, only to notice that the person the position is less qualified.”

Charles Zanders is one of the workers represented in the lawsuit. “When I heard the ruling yesterday morning — it was like a slap in the face. And the hurt was just as intense as the hurt was when I went through the application process and (was not given) one interview during the interview process,” Zanders says.

Ratliff says the governor and his administration need to take action to improve the hiring process. “One of the things that I think that needs to be done is, if they haven’t they need to read the report again,” according to Ratliff. He says former Governor Chet Culver issued an executive order to address the issue and there were a couple of people hired, but he says overall “a lot of things have not changed.”

While Ratliff says he would not recommend African-Americans come to Iowa seeking state jobs under the current situation, he also says he is worried young African-Americans who live here will leave the state looking for jobs elswhere.