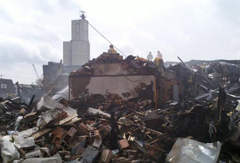 The Titonka Savings Bank was destroyed by fire.

The president and C.E.O. of the northern Iowa bank that was gutted in a weekend fire says a temporary location is now open and they’re making plans to rebuild.

Allan Boyken, of Titonka Savings Bank, says they’re moving forward with a disaster plan in getting things back to near-normal as quickly as possible.

Boyken says they’ve set up temporarily in the Titonka Community Center and they’ve made arrangements to have a modular banking facility brought in and will have that set up by the end of next week.

He says they already have plans to rebuild on the site. Boyken says they are grateful to the Titonka community for the support, assistance and patience since Sunday’s fire.

He credits firefighters with being able to control the damage around the vault area to keep the contents intact. Four bank employees also serve on the fire department and they knew where the vault was located and tried to keep that area as cool as possible. Customers are naturally concerned about the contents of the vault and all of the safe deposit boxes inside. Boyken hopes they’ll learn more about the vault soon.

“It certainly appears to be intact,” he says. “Obviously, we can’t remove any of the debris or anything and get to it until we have the go-ahead from the insurance adjusters.” Boyken says they’re keeping customers updated through the website, “tsbbank.com”.