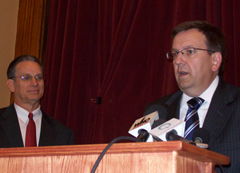 Republicans in the Iowa House are reviewing a plan that would cut commercial property taxes by $250 million over the next several years.

The proposed deal merges ideas advanced by Senate Democrats with proposals from Republican Governor Terry Branstad. Legislative leaders like Senate Democratic Leader Mike Gronstal of Council Bluffs are reluctant at this point to reveal the details to the public.

“I’m more confident than I have ever been in 30 years that we can get something done on commercial property taxes in this state,” Gronstal told reporters this morning. “…We do not yet have an agreement, but I think we’re much closer, probably, than a lot of people realize.”

House Speaker Kraig Paulsen of Hiawatha, the top Republican in the legislature, said “components” of competing plans from Republicans and Democrats are included.

“We haven’t committed or agreed to anything yet,” Paulsen told reporters this morning. “It’s definitely interesting and we’re spending time on it. It’s important to us to protect the homeowners and the residential property tx payers in there, but we’re working through it.”

Republicans in the House, for example, have voted to limit the growth in property taxes on homes, which are tied to the value of farmland. In June of last year legislators walked away from competing partisan plans on property tax relief, but Paulsen suggests this year is different.

Gronstal, the top Democrat in the legislature, said it appears both sides in this debate are now conceding points to the other.

“The enemy of getting something done in the past has always been people kind of shrugged their shoulders and said, ‘That’s not good enough,'” Gronstal said. “I think we’re going to end up with something that’s very significant, very real.”

Gronstal and Paulsen expect the 2012 legislative session to conclude next week. Both say the differences over state spending plans should be resolved by the end of this week, giving legislators time next week to handle the paperwork and send the bills to the governor’s deal.

AUDIO of Paulsen speaking with reporters on this and other topics.

AUDIO of Gronstal and Senate President Jack Kibbie speaking with reporters on this and other topics.