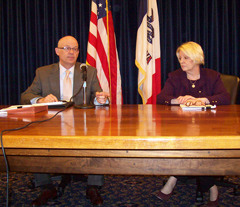 Governor Terry Branstad made over $190,000 last year and paid a federal income tax rate of 18 percent. Branstad and his wife filed joint tax returns at the federal and state level and refunds totaling more than $25,000.

The couple contributed over 13 percent of their adjusted gross income to churches, schools and other charities. Jeff Boeyink, the governor’s chief of staff, met with reporters early this afternoon to go over the details in the Branstad’s tax returns.

“The governor, every year that he’s been governor or a candidate for office, has released his tax returns,” Boeyink said.

Boeyink said Branstad got significant refunds at both the state and federal level because Branstad’s income is “significantly less” than it was in 2010, the year before Branstad returned to the governor’s office.

“Obviously the salary here (in state government) is much less than the salary at Des Moines University and he removed himself from all the various corporate boards,” Boeyink said, “which those were income producers when he was in the private sector.”

Branstad’s income from 2010 to 2011 dropped more than $100,000 and that, combined with the state tax break which lets Iowans deduct whatever federal taxes they paid, means Branstad wound up owing just $52 in state income taxes in 2011.

The governor’s long-time accountant joined Boeyink at the statehouse today to answer questions about the Branstad’s lengthy federal and state tax returns.

“I think his motivation is just to be extremely transparent, you know, as far as where his income is. He’s always been pretty open with people,” Boeyink said. “I think this is just an outgrowth of his desire to be pretty much an open book to Iowans.”

The Branstads made over $25,000 in charitable contributions last year, including donations to Catholic charities, Living History Farms, the hospital in Boone and Des Moines University, where Branstad served as president. Branstad’s tax returns also show he’s taking significant losses from his investment in Liberty Bank. The governor and his wife also own a dozen buildings that are rented to the U.S. Postal Service. Those post offices yielded a profit for the Branstads of about $39,000.

The following overview was provided by the governor’s staff: