You are here: Home / Agriculture / Vilsack says Army Corps should be “more flexible” in river management 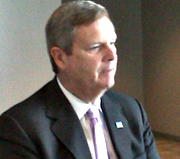 U.S. Ag Secretary Tom Vilsack is suggesting the Army Corps of Engineers should be more nimble in responding to weather events that impact the agency’s management of the Missouri River.

“It would be well for the Army Corps to be more attentive to the needs and to listen more closely to the concerns along the river systems. I think there’s a tendency for the Army Corps to say, ‘Hey, we’ve got the answer,'” Vilsack said this morning during taping of an Iowa Public Television program. “You know, you really have to have better dialogue and better communication with folks.”

Farmers and others along the Missouri River have complained about the way the Corps managed the release of water from upstream dams last year — leading to massive, long-term flooding along the river corridor. Vilsack this morning told reporters the Corps needs to build “more flexibility” into its management plan for the Missouri.

“When they saw record snowfalls and snowpack, there should have been, ‘Hey, how does this fit into our overall strategy and does it still fit and does it still work?'” Vilsack said. “We’re seeing more extreme weather conditions and I think that put the emphasis and a requirement on all of us to constantly rethink whether or not our assumptions were correct in whatever plan we’ve developed.”

According to Vilsack, the Corps should “be more engaged” in an on-going review of its management plan for the Missouri or any other river.

Vilsack, a former Iowa governor, made his comments this morning during and after taping of an appearance on Iowa Public Television’s “Iowa Press” program which airs this evening at 7:30. During the show, Vilsack indicated he would like to continue as the nation’s ag secretary if President Obama wins a second term.

“I love my job. I think I’ve got the greatest job in America,” Vilsack said. “There are a lot of factors that go into a decision like that…We’ll let the president make those decisions.”

Vilsack suggests the farm economy is one of the bright spots President Obama can emphasize in the 2012 campaign.

“I think the president’s going to be reelected and I think his USDA has been a department that he can be proud of,” Vilsack said. “The achievements we’ve been able to accomplish: a record number of acres in conservation, record farm exports, record farm income, record farm loans, record home loans in rural America. I think there’s a lot to talk about.”

Vilsack is flying back to Washington, D.C. this afternoon after speaking at a Des Moines-area “life science” company that converts farm commodities into ingredients used in prescription drugs, nutritional supplements and beauty products.