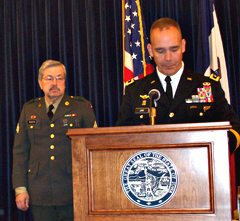 State officials are planning a parade in Des Moines on Saturday, June 30 to honor the state’s veterans and those who are currently serving in the military.

Governor Branstad wore his own Army uniform to make the annoucement this morning.

“The parade will be similar to what we did in 1991 to welcome home the soldiers after the first war in the Gulf and I wore this uniform at that time,” Branstad said. “It’s the same uniform that I wore when I was in the service from ’69 to ’71.”

“You know, I look back to my great-great-granddad that was in the Civil War, started as a private then ended as a company commander marching down Pennsylvania Avenue (in Washington, D.C.),” King said. “And then, you know, looking at all the friends that served in Korea and then that those from Vietnam and a lot of those who are really stepping up to the plate and really want to make this a really neat celebration for the community.”

According to Iowa National Guard Adjutant General Timothy Orr, there are nearly 230,000 veterans in Iowa and more than 15,000 Iowans who are current members of the military.

“This is a tremendous opportunity for Iowans to celebrate their veterans, the service members, their families and the (state’s) rich military tradition and history and to show those who gave their ultimate life in the ultimate sacrifice for our country,” Orr said.

Iowans have served in every major U.S. conflict since the Mexican War in 1846. This year marks the 150th anniversary of the Civil War, the 60th anniversary of the Korean War and the start of a three-year-old commemoration of the start of the Vietnam War. Organizers like Orr plan for this parade to be a long-delayed tribute to those Vietnam veterans who weren’t welcomed home as current soldiers have been.

“There’s a generation there from the Vietnam era that I think this parade is going to have a special meaning,” Orr said. “It’s an opportunity for us to say, ‘Welcome home,’ to that generation that didn’t receive the same type of acolades and, more important, respect that this generation has serving today.”

The parade will start at 10 a.m. at the state capitol, go west on Grand Avenue, then turn north up 2nd Avenue. It will end at Veterans Memorial Auditorium. Call the Iowa Department of Veterans Affairs at 1-800-838-4692for more information, or to register a parade entry.  The governor’s website also has parade details.