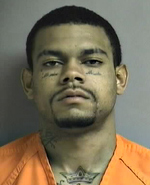 A Des Moines man is in custody in connection with shootings last Friday in Cedar Rapids. Police have charged 25-year-old Teran Huff with two counts of attempted murder, two counts of willful injury and first-degree robbery.

The shootings took place at the Kirkwood Court Apartments. The three people who were shot, 21-year-old Shannon Gaskins, 22-year-old Alexander White and 24-year-old Raymond Sellers, remain hospitalized, but there’s no word on their conditions.

Cedar Rapids Police Sergeant Cristy Hamblin says investigators are still trying to determine exactly what happened. “Hopefully, later this week or the beginning of next week, we will be able to let the public in on everything that occurred there,” Hamblin said. “We just want to make sure we get everything taken care of, so we can hold everybody responsible for the shootings.”

The shooting incident took place over the noon hour last Friday and prompted Kirkwood Community College and several nearby schools to go into “lockdown” mode.