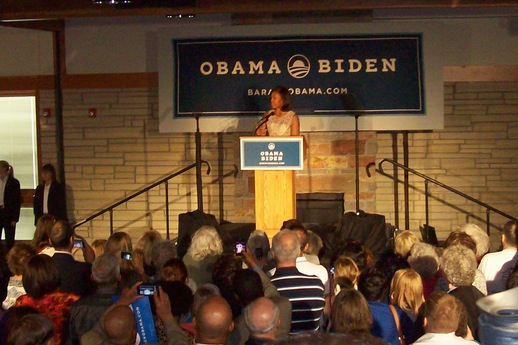 Obama spoke privately to campaign donors before speaking to an invitation-only group of campaign volunteers. Only 250 were able to crowd into the conference center in Windsor Heights, a Des Moines suburb. Another 150 were in a tent outside, watching a video feed of Obama’s remarks.

Without referring to likely Republican rival Mitt Romney by name, Obama touted her husband’s “middle class” values as a point of contrast with the wealthy businessman.

“All you have to guide you are your values and your vision and your life experiences. In the end when you’re making those impossible choices it all boils down to who you are and what you stand for — and we all know who my husband is,” Obama said, with emphasis on that last phrase before the crowd erupted in cheers and applause.

Obama suggested her husband’s signature accomplishments were “all on the line” this November.

“It all boils down to one simple question: will we continue the change that we’ve begun and the progress we’ve made or will we allow everything we’ve fought for to just slip away?” Obama said, and many in the crowd shouted of “no” in response. “We know what we need to do, right? We cannot turn back now. We need to keep moving forward.”

Find the audio of the first lady’s speech here.

The first to speak to the crowd this afternoon, though, was Deidre DeJear, an Obama campaign volunteer who warned there was an onslaught of “millions of dollars” in attack ads coming this November.

“But it doesn’t matter because we have you all,” DeJear said. “No amount of money can measure up to what these people in this room are capable of.”

CeCe Ibson of Des Moines was invited to talk about her struggle to get health insurance after her husband died of cancer and she lost her job.

“No one, until President Obama, stood up for me and millions of Americans like me across Iowa and across the country,” she said, to applause from the crowd.

Then, for about 20 minutes, Michelle Obama talked about the Obama Administration’s accomplishments of the past three and half years, listing things like passing health care reform, resurrecting the nation’s auto industry and ending the military’s “Don’t Ask, Don’t Tell” policy. She closed with this:  “One more person can make the difference…so I have one last question for you: Are you in?” she asked, and the crowd cheered. “Are you ready to do this?”

“I feel like he’s Prometheus, pushing that rock up the hill because, you know, he goes one step up and congress stomps him right down,” Prescott said. “And yet he has made accomplishments that are taking our country in the right direction.”

President Obama is to be in Iowa Wednesday, speaking at the University of Iowa about efforts to reduce student loan debt. A spokesman for the Republican National Comittee suggests the Obama’s efforts will not yield results in November.

“While Team Obama rolls out surrogates and campaign pageantry, Iowa voters have become disenfranchised with 3.5 years of President Obama’s broken promises and failed policies,” RNC spokesman Ryan Mahoney said in a written statement. “..Iowa has shifted away from Obama and no amount of campaign events can change that fact.”

(This story was updated at 8:05 p.m. with additional information.)