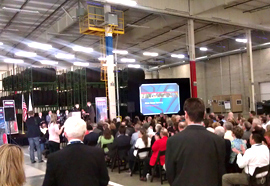 Grand opening ceremony for the Mitas plant in Charles City.

Company officials were joined by Iowa Governor Terry Branstad, the U.S. Ambassador from the Czech Republic and approximately 200 community leaders and 100 Mitas employees.

Governor Branstad said the project is a key one in economic development efforts.

“This is the first major Czech investment in the United States, we’re glad that it is here in Iowa. We’ve got also other international companies that have chosen Iowa, but because of the strength of agriculture we think there’s great opportunities right now,” Branstad said.

Mitas officials said they located in Charles City for several reasons, including the strong farm economy, location near their customer base and the cooperation of city officials. They also noted the concentration of Czech immigrants living in the northeastern Iowa area. Branstad says he feels a real kinship with the Czech Republic.

“My wife is part Czech, so I’ve been to Prague a couple of times and we’re very excited about this investment,” Branstad explains. “We think it’s going to be very good for the Czech company…and for the state of Iowa and also for our farmers who are going to be able to use the quality tires made at this plant in Charles City, Iowa.”

Company officials said they have invested $52-million in renovating the former Winnebago Industries factory and installing new manufacturing equipment. The company currently employs 76 full time employees, and plans to employ 237 employees by the end of 2013.

The C.E.O. of Mitas, Jaroslav Cechura says when company officials were looking at whether or not to import tires or to have a tire factory inside the North American market produce them locally, it was clear that a plant site like Charles City was the best choice.

He says their belief is that farmers are conservative people who would like to use equipment which is a local product. Tomas Nemec, chairman of Mitas’ parent company CGS Holding, says the factory is a combination of American and Czech technology.

He says company officials weren’t at the ceremonies today just as representatives of the company, but as representatives of Czech and Slovakian industry. Mitas also announced today that they’re three years ahead of schedule in achieving their full production capacity of 13,500 metric tons of tires a year by 2013.

The opening of the manufacturing facility signals a re-birth of tractor industry in Charles City. An Oliver brand tractor produced in Charles City decades ago was showcased at the ceremony, decked out with one of the first sets of Mitas tires off the assembly line.