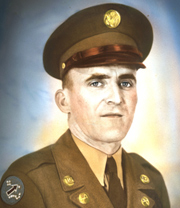 A soldier who left Iowa over 60-years ago to fight for his country will be laid to rest today. Iowa National Guard Spokesman, Colonel Greg Hapgood, says the ceremonies today will honor a soldier who was 32 when he gave the ultimate sacrifice.

“Sergeant First Class Edris Viers was from Swan, Iowa. He was serving in the U.S. Army during the Korean War and was missing in action (August) 12th 1950. He was in a terrible battle called the Battle of Bloody Gulch,” Hapgood says.

Viers was officially declared dead in December of 1953. His unidentified remains eventually ended up in a U.S. cemetery.

“There were a number of soldiers who were missing in action from this battle. Their remains were buried in a grave in South Korea near Masan, and at some point in the 1950’s many of those remains were basically removed from Korea and reburied in the National Memorial Cemetery of the Pacific in Hawaii,” according to Hapgood.

Modern technology eventually led to the identification of Sergeant Viers. Hapgood says,”At some point last year, the Department of Defense started to reevaluate those unknown remains and was able to match the remains of one unknown soldier with the profile for Sergeant Viers and made a positive identification.”

The tour in Korea came after Viers had served with the Army in New Guinea and the Philippines during World War II. The final chapter of his service to our country will end with the services today. “A memorial service will be held for Sergeant First Class Edris Viers in Pleasantville. The visitation is from 11 until 12 p.m. at Mason Funeral Home, and that will be followed by a memorial service and then he’ll be buried immediately afterwards at Swan Cemetery, which is just south of Des Moines.”

Proceeds will be used to facilitate identification and recovery of U.S. servicemembers missing in action from the Korean War.

Viers is survived by his niece, Mabel Flaig of Hartford; and nephews Jerry Dabb of Kingman, Arizona; Jerry Viers of Swan; William A. Viers and Alan Viers of Indianola; and Larry Viers of Des Moines.