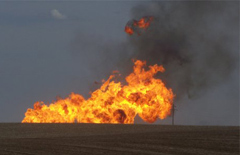 Flames and smoke could be seen for miles after a natural gas pipeline was struck in Plymouth County.

Crews are working to repair the natural gas pipeline that was damaged Wednesday in Plymouth County when two men working with a trencher hit it.

Loeffler says they are working around-the-clock, but he is not sure how long the repairs will take. He says they have a parallel pipeline next to the one that was hit, so no customers lost service following the accident and explosion.

Some parts of Woodbury County were without power for a short time as the blast damaged some power lines and poles. Loeffler says the explosion and resulting fireball could have easily been prevented.

“Third-party damage is one of the primary causes of ruptures in natural gas pipelines. And it is so preventable, because all a person has to do prior to excavation is to call 8-1-1,” Loeffler says. “We will go out there and not only locate the pipe, but if you’re excavating in a place that’s near our facilities, we’ll leaver personnel there to make sure that you’re protected and the pipeline is protected.”

The two men operating the trencher that hit the pipeline, 33-year-old Christopher Derocher of Le Mars and 28-year-old Jacob Brown of Sioux City, suffered burns in the explosion. Derocher was treated and released, while Brown was hospitalized in fair condition.