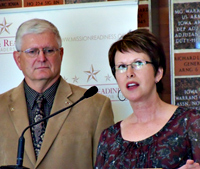 Two retired generals from Iowa and the mother of a Medal of Honor recipient are calling on federal and state officials to not cut spending on early childhood education.

Speaking on behalf of the group called “Mission Readiness,” Pierce says there are several issues that cut down on the pool of available recruits.

“They have not graduated from high school or can’t score high enough on the military entrance exam is one. Two, they are physically unfit, or three, they have a criminal record,” Pierce says.

“One of the biggest reasons is poor educational achievement. Many of our young adults cannot meet the military’s basic standards in math, reading and problem solving.” The Iowa Legislature continues to work on its budget.

Retired Army Brigadier General, Mark Zirklebach, says they are aware of the budget discussions and how education is involved in those discussions.

Pierce says everyone should be concerned about the education spending and its impact on the military. He says one dollar invested in education will give a return of 16 dollars, and it is timely to the legislature because they are still in session and still discussing the budget.

“But this is a national issue and we want to try and get the message out wherever we can across this nation, that this is a huge issue from a national security standpoint. And it has been validated that an investment in education will solve a lot of this nation’s issues,” Pierce says. Rose Guinta of Hiwawatha, is a teacher and the mother of Medal of Honor recipient Sal Guinta. She talked about the issue from another perspective.

“I see the parents on a daily basis, and I’ve been doing this for four years, and their hardships are real and they do need help, and what better time than when they are little. I’m not talking about the children right now, I’m talking about the parents, when they’re still trying to figure this out,” Guinta says.

Guinta says early childhood education programs provide a flood of resources that help those young parents, which in turn improves the education of kids. “All kinds of services come in and much of it is going to take that mindset of the parent and help them rethink the way they look at their children, the way they look at where they are at personally. Yes this is about the kids, but if you can get this to move forward, you can get the parents to start changing some of their mindsets too,” Guinta explains.

Guinta says it was very evident when her son was younger that the kids who had access to early childhood education were ahead of him in some areas. Both Zirkelbach and Pierce are retired from the Iowa National Guard.