About 40 people turned out for a midday rally at the statehouse organized by the “Tea Party Express.” Singer Diane Nagy got the program started by declaring that the group’s main intent is “to keep America America.”

“Hello, Des Moines. I can’t hear you,” Nagy said to the crowd, which doubled in size as the event progressed. “We may be small, but we are mighty, aren’t we? We have a voice and I know you’re going to use your voice and that’s why we are here today. We’re traveling all across the country to carry your voice, so we can remind our elected officials that, oh yeah, they work for us!”

A series of speakers decried both the U.S. government and the United Nations as the “unseen hands destroying our freedom.” Howard Kaloogian is a former California legislator who hosts a weekly “Tea Party Express” radio show which he promoted during the Iowa rally.

“Can you stand four more years of this?” Kaloogian asked the crowd, many of whom replied, “No.” He continued: “Will you be better off if Obama’s re-elected? Well, maybe you would be if you’re looking to get on food stamps.”

The group’s main focus right now is on the U.S. Senate, but Iowa doesn’t have a U.S. Senate race in 2012. Tea Party Express rallies today in Des Moines and Sioux City are focusing instead on the presidential race — and Iowa’s status as a swing state that could vote for either Democrat Barack Obama or likely Republican nominee Mitt Romney. But a couple of local candidates for the Iowa legislature were also given a chance to speak. Vicki Stogdill is a Republican candidate for a state senate seat in Des Moines.

“I don’t think we should have career politicians anymore,” Stogdill said. “I think we need to go back to a government of the people, by the people, for the people.” 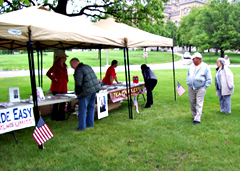 “I’m not the appointed candidate,” Everly said. “If I am army of one, let it be one. Someone has to take the first step.”

A pastor who’s also a rapper and calls himself “Politic” performed at the event as well.

“Iowans — is that how you say it? EYE-uh-wins?” he asked. “We need you to help build this cultural campaign. Please visit the table.”

The performer was selling his music at a table nearby, along with vendors selling books and other items.

“Today’s low turnout at the capitol demonstrates the obvious power struggle going on right now among Republicans in Iowa and across the country,” Iowa Democratic Party chairwoman Sue Dvorsky said in a written statement emailed to reporters who covered the event. “Even as Mitt Romney drags the Republican Party further to the Tea Party right with his outspoken support for extreme economic policies that would jeopardize the middle class and have severe consequences for our recovering economy, today’s turnout is a clear signal there is very little gas left in the tank of the Tea Party Express.”