You are here: Home / Human Interest / U.S.S. Iowa signed over to nonprofit group

The U.S. Navy today handed over ownership of the U.S.S. Iowa battleship to the California group that’s turning it into a floating museum. Audio: Dar Danielson report on the U.S.S. Iowa transfer. :60 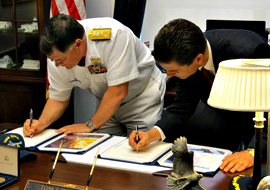 The Navy awarded the Iowa to the Los Angeles-based non-profit Pacific Battleship Center seven months ago.

The battleship has been docked at the Port of Richmond in San Francisco Bay, where the Pacific Battleship Center has been working on its renovation. 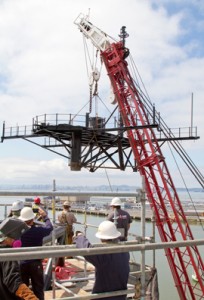 “It’s just amazing the transformation,” Kent says of the restoration effort. “Last Tuesday we actually set the 56,000 pound top of her mast back in place. It was cut off back in 2000 in order to transit under some of the smaller bridges where she went into storage.”

He says things have been moving ahead at “flank speed” with a lot of painting and other work in preparation for moving the ship to its final home.

The center will hold a commissioning day for the Iowa on July fourth and it will be open for public tours on July seventh. The State of Iowa donated three-million dollars to U.S.S. Iowa’s preservation.