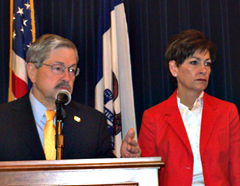 The black Chevy Tahoe that ferries the governor and lieutenant governor around Iowa was damaged today in a deer-versus-vehicle crash.

At the time of the wreck both Governor Terry Branstad and Lieutenant Governor Kim Reynolds were riding in the S.U.V., which was being driven by a state trooper.

Tim Albrecht, the governor’s press secretary, says the accident happened at about 1:40 this afternoon on southbound Interstate 35.

“Governor Branstad and Lieutenant Governor Reynolds were traveling back from an event at Pine Lakes State Park in Eldora,” Albrecht says.

“At mile marker 126.5,  just north of Story City,  two deer crossed the path of the S.U.V. in which they were traveling. A third deer was struck by the S.U.V. and the vehicle sustained damage, but everybody’s o.k.”

The deer was killed on impact, according to Albrecht, and the trooper was able to drive away from the scene.

“The SUV was still driveable. It did sustain quite a bit of damage on the driver’s side and the driver’s door is actually unable to be opened at this point,” Albrecht says. “The vehicle is fixable and it’ll be in the shop a few days we imagine.”

Iowa law requires the state’s governor to be driven by a state trooper. The law was passed over half a century ago after an Iowa governor who was driving himself was killed in a car wreck. Governor Bill Beardsley was killed on November 21, 1954, during his third term as governor.