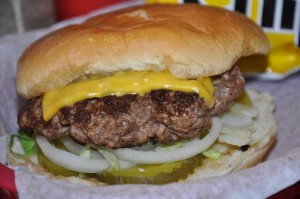 A diner and bowling alley has landed this year’s title for “Iowa’s Best Burger.” The award is handed out annually by the Iowa Beef Industry Council and Iowa Cattlemen’s Association.

This year, judges selected The Coon Bowl III in Coon Rapids. Cindy Heydon, co-owner of The Coon Bowl, says their half-pound burgers are basic. “We actually don’t do anything to them,” Heydon revealed. “We don’t salt them. We don’t mix anything into the hamburger. Nothing. Just a plain old hamburger on the grill.”

Judges noted the “juiciness” of the champion burger. Heydon credits the 80/20 blend of ground Iowa beef and the use of a flat-iron grill for the juicy factor. She also credits a loyal, local customer base for nominating her business for the award. “And I have people who travel through here who will stop more than one time…they come back,” Heydon said.

The Coon Bowl dining area can seat around 80 patrons. The business also features an eight lane bowling alley and a small game room. The basic burger at The Coon Bowl costs $4. The most expensive burger, the bacon cheeseburger, is just $4.80.

This marked the third year for the best burger contest. Last year’s winner was The Rusty Duck in Dexter, while Sac County Cattle Company of Sac City won the inaugural event in 2010.