You are here: Home / News / Gingrich thanks “key” Iowa backer as he exits race 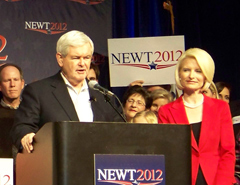 Linda Upmeyer, the Republican leader in the Iowa House, endorsed Gingrich in early 2011.

“(She) was courageous and…stayed with us throughout the whole process from the period when we were supposedly dead to when we rebounded, to the massive weight of advertising and Linda was just spectacular in solidly campaign all across the state of Iowa,” Gingrich said. “And I also want to thank Speaker Paulsen of Iowa who was a tremendous help.”

Iowa House Speaker Kraig Paulsen, a Republican from Hiawatha, endorsed Gingrich on December 21, a couple of weeks before the 2012 Iowa Caucuses. Polls in early December showed Gingrich leading in Iowa, but he wound up finishing fourth. Gingrich has blamed a barrage of ads run against him by Mitt Romney and Ron Paul for that fall. During his remarks yesterday, Gingrich called the entire campaign a “wild ride.”

“I could never have predicted the low points or the high points,” Gingrich said. “I mean, it was all sort of amazing and astonishing.”