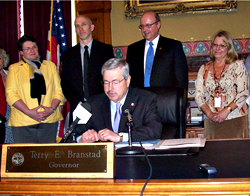 Governor Branstad signs the bill into law to create an agency to oversee the "sunshine" law.

Governor Branstad has signed a bill into law that creates a new state agency to investigate complaints about city and county governments that fail to comply with Iowa’s so-called “sunshine” law.

“Iowa actually has a pretty good open meetings and open records law, but we really didn’t have an enforcement mechanism and now with this we will have,” Branstad said.

The governor, though, stresses that part of the agency’s mission is to be an information clearinghouse, too.

“Many local governments that might have questions about the law can call and get accurate information,” Branstad said. “…I know most people want to comply with the law, so we think this will be a real asset and a real help to the local governments.”

The three branches of state government are not covered by the law and the new agency will not have any jurisdiction to investigate complaints about openness concerns in the executive, legislative or judicial branches. The new agency’s executive director is to be a lawyer and nine people will serve on the new Iowa Public Information Board of directors.

“My hope is that we choose the right people to be this board,” Branstad said. “I already have some thoughts in mind. I won’t share them today, but some people that I think can get us off to a good start and I hope that we can do it right away and have it running with the beginning of the new fiscal year on July 1.”

Advocates have been pressing for creation of this new agency for the past six years, but ran into opposition from cities and counties and from Republicans who did not want to expand the size and reach of state government.  However, Branstad, a Republican,  made “openness and transparency” issues part of his 2010 campaign for a fifth term as governor.