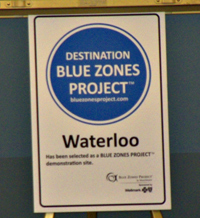 Cedar Falls, Mason City, Spencer and Waterloo were announced today as the first four “Blue Zones Project” cities under the plan to try and make Iowa the healthiest state in the nation by 2016. The four cities will get help and advice in how to make their residents healthier.

Governor Terry Branstad set the healthiest state goal, and announced the four cities today at the headquarters of one of the state’s largest health insurers, Wellmark Blue Cross and Blue Shield. Branstad says he’s pleased the way people have taken up the challenge.

“We’ve already found there’s tremendous traction,” Branstad says. He says the four communities will be the demonstration sites as the effort gets rolling. “The Blue Zones Project is critically important to accomplishing the goal of being the healthiest state,” the Governor says. 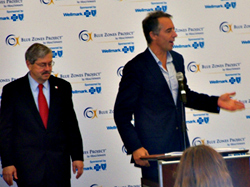 “I think getting this involvement and enthusiasm in communities across the state can really make a difference.”

The Blue Zones Project is based on the Blue Zones principles created by Dan Buettner. Buettner says it’s not about dieting or exercising, it’s about changing environments.

“Well, when it comes to health, the problem is not the frog, the frog just does what its biology tells it to do. We live in an environment of ease and abundance.”

Buettner says he looked at some of the societies that are the healthiest and found it was the environment and attitudes that made the people healthier. He says that’s the idea behind the Blue Zone Project. “There’s no silver bullet, but there is silver buckshot. And the silver buckshot is to go into ready communities — communities who want this — and identify the environments in which we live,” Buettner explains.

“Schools where our kids go, the places that employees work, homes to a certain extent, and thinking of our communities, municipal government. And then taking evidenced based ways to change the environments in permanent to semi-permenent ways.” Buettner says this is the only project of it’s type in the country.

“The only way it’s gonna work is if you can orchestrate a perfect storm of grassroots — people who want this — leadership and the media. And the four cities we’re announcing today, we believe are the most ready. We think there were 89 cities right behind them that were almost as ready, and I would have happily come in and done a Blue zone there. We just think the best way to go about this is to prove that we can do it in a big way,” Buettner says.

There will be more Blue Zones cities announced in January. In the coming months, experts will work with Cedar Falls, Mason City, Spencer and Waterloo to adopt the Blues Zones principles. You can find out more about the project at: www.blueszonesproject.com.