You are here: Home / Health / Medicine / Mayors anxious to get into Blue Zones Project

” The project uses BlueZones principles from some of the healthiest areas around the world and applies them to the Iowa cities in an effort to become the healthiest state in the nation. Waterloo is one of the cities and Mayor Buck Clark believes his city can be a good example for the rest of the state.

“I am extremely excited and I’m looking forward to the challenge of getting all of Waterloo involved in this project, and having not only a healthier Iowa, but particularly a healthier Waterloo. We’re very excited,” Clark says.

Waterloo’s next door neighbor, Cedar Falls, was also chosen for the program. Clark says while the two cities often have friendly banter between each, this is a case where they are thinking in the same way.

“And I think that this, having both of us gotten this designation is going to further solidify that we’re the Cedar Valley, you know we’re Waterloo-Cedar Falls and we do a lot of things together. And boy when we’re talking about getting healthier together, I’m extremely excited,” Clark says. “I think the Blue Zones organization (is) excited to see how this is going to work with two cities right next to each other.” 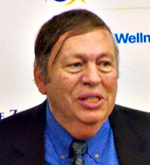 Cedar Falls Mayor, Jon Crews, agrees. “I wouldn’t have thought they’d have picked two cities side-by-side…usually these things when the funding is available they usually spread it out all over the state. They picked two of us side-by-side, which is a little surprising, but I think they want to see how a metro area can work together,” Crews says.

Crews says Cedar Falls has done a lot to move toward becoming healthier, and he anticipates the help they’ll get with the Blue Zones designation will take that to another step in creating better environments.

He says for example if you go to most grocery stores and you are hungry, the first thing you see in the check out are candy bars, pop, and potato chips.

Crews says they need to change those things to give more healthy choices and that will go along with riding and walking trails and other things in the community to make moving more an easy choice. Mason City and Spencer are the other two communities.

Spencer Mayor Reynold Peterson, says his community is the smallest of the first four chosen. “It’s just a super thing for Spencer. We’ve been behind this from the governor’s initial walk, take a 30-minute power walk in October…and the community has bought into it totally. And it’s just super what it means for Spencer,” Peterson says. He believes Spencer was chosen because of that community commitment and the programs they already have going.

Peterson says for example, they have a program that looks to create safe walking routes to school and they have community members who go out one day a week to walk to school with kids. “All this ties in to try and make a better community, which is what we’re all trying to do,” Peterson says.

While all the communities have started programs to make their residents healthier, Waterloo Mayor Clark, says there are still a lot of things ahead as they get help from professionals in forming the Blue Zones. “You know, we don’t know yet all of the things we’re gonna have to do. We are a town of 66-thousand people, you know getting 66-thousand people behind this is gonna be a challenge. But we are up to it,” Clark says.

You can find out more about the principles of the Blue Zones at: www.bluezonesproject.com .