You are here: Home / Sports / Andretti looking forward to return to Iowa Speedway 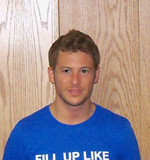 Indycar driver Marco Andretti is looking forward to defending his title at next months Iowa Corn Indy 250 at the Iowa Speedway. The grandson of racing legend Mario Andretti claimed his second Indycar Series victory in a race that featured five lead changes in the final 60 laps.

“Obviously it brought me some success, you know being selfish, but I really like driving there, It think it’s a real driver’s track and it’s trick to get right, because it’s about finding that balance between super speedway setup and a oval setup. And I’ve been in a race where it’s kind of raced like both,” Andretti says.

Andretti says the Iowa Speedway changes as the rubber builds up on it. “Obviously under the lights is a lot of fun as well and the fans make that race what it is and it’s very special to come here every time,” Andretti says.

The focus right now for Andretti is the Indianapolis 500. The track opens for practice on Saturday and the race for the pole is May 19th. Andretti says, “You know the race there is always different from qualifying, so if I qualify 33rd we can win that race. So that’s what we are showing up to do is to win that race, not so much put it on the pole. But it’d be great.”

Andretti was in Iowa shooting and recording promotional material for the Iowa Corn Indy 250, which is June 23rd.