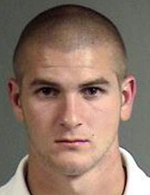 Police say an attempt by a University of Iowa student to use a stolen ID to enter a bar failed miserably over the weekend. It happened early Saturday morning at the Union Bar in Iowa City.

A bouncer at the door was handed an ID he recognized right away. Iowa City Police Sergeant Denise Brotherton says it was the bouncer own ID.

“When this person came to the door to show ID to get in, (the bouncer) immediately recognized the driver’s license to be his,” Brotherton said. The bouncer, who is not named in the police report, had reported his ID, credit card and Triple-A card were stolen from the Union Bar back in February.

The student who allegedly tried to use the bouncer’s ID is identified as 19-year-old Steven Fiorella of Chicago. Fiorella told officers that he purchased the ID and other cards for $20 at a party from an “unknown subject.”

Fiorella is charged with fifth-degree theft and unlawful use of another’s ID.