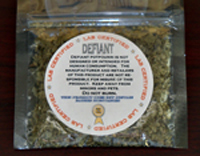 One of the bills that sailed through the House and Senate in the closing days of the 2012 session seeks to halt sales of so-called “synthetic” drugs.

“And I said at that point we’d be back this year, doing some more,” Fraise says. “As long as we’ve got people wanting to use this stuff and we’ve got people smart enough to change the formulas, it’ll keep coming at us.”

The new law would expand the list of chemical substances on the “banned list” to try to make it more difficult for manufacturers to make small changes in the chemical make-up of products, to skirt the law.

So-called synthetic drugs are sold as products like incense and bath salts, with marketing that promises a “high” similar to marijuana. But serious side effects have been reported and a few users have committed suicide. Senator Fraise suggests adults need to do a better job of educating kids about the danger.

“The only way we’re ever going to get a handle on this thing is people are going to have start working overtime educating the kids and the young people,” Fraise says. “Don’t use this stuff. It’s poison. You don’t know how much of this stuff to take before it kills you.”

The bill passed the House and Senate this week without a dissenting vote. It now goes to Governor Branstad for his approval. Branstad’s wife, First Lady Chris Branstad, on Monday lent her support to a public relations campaign about the dangers of synthetic drugs.