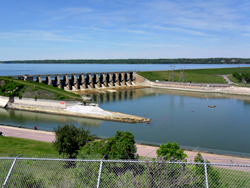 The Missouri River fell nearly 8-feet on Wednesday as the U.S. Army Corps of Engineers shut off the flow from Gavins Point Dam near Yankton to inspect the concrete slabs below the spillway gates.

“We have a foot and a half of concrete on top and that is on top of a four-foot gravel layer,” Becker says.

“Ever since January, we’ve had concerns about that gravel layer. We had a couple of gates open, gates 2 and 3 at this south end, and we saw water coming out of the drain at the north end and we said, ‘That’s not right.'” Becker says the record flows that brought the prolonged, record flooding last summer caused damage under the concrete.

He says, “What we found was that some of the drain grates had been washed off during the flood and some of that water was going straight down the drain holes and into the gravel layer and eroding some of that gravel.” He says the concrete is all fine but there’s at least one large “void” in the gravel.

Becker says crews used the low water level on Wednesday to get a closer peek at the problem areas. The ground-penetrating radar takes a look at the concrete and the gravel area underneath to see what condition it’s in and to see if there are any voids,” he says. “They also drilled holes in the concrete so they can visually just take a look down there and see what they got, they can stick a piece of rebar down there, feel around, see what they got.”

Becker says there are no structural issues with the spillway and they are not worried about any leaking. He says they hope to get the spillway repaired before next spring. Flows on the river were restored about midnight and the river’s level today is back to normal.