A new exhibit called “Somewhere in Time” at the Iowa Genealogical Society highlights some historical wedding wear. You may’ve seen some of the shows on TV that follow harried brides as they agonize over the selection and cost of their wedding dresses.

The Genealogical Society takes a more toned down approach that looks the history of heirloom wedding dresses from across the state. While today’s dresses are predominately white with all the lace and frills, society spokesperson, Alice Veen, says you’ll see dresses in this exhibit that are more practical.

Veen says white was not the popular color for wedding dresses until Queen Victoria wore that color in her wedding in the mid-1800’s.

She says even after that, brides couldn’t afford to buy a white gown and wear it only once. Veen says her grandmother for example, was married in 1919 and wore a blue wedding dress that she could later wear on the job as a teacher.

The exhibit includes vintage photos and wedding stories along with the dresses. The oldest dress dates back to 1863 from a woman who was married in Massachusetts. 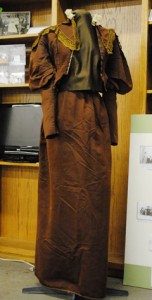 “The family migrated to Iowa after that marriage and she writes about the history of that family and what motivated them to come to Iowa and about their lives here, where they lived,” Veen explains.

“Each exhibit comes from a different county in Iowa, so we have a variety of areas represented. And we look at different phases of history through the eyes of the people whose marriages took place at those times.”

The exhibit moves from that 1860’s era dress up to a dress from 2008. “And you can see the differences in time, of how local society handled weddings, what it was like for them, how they might have met, where the wedding took place and the circumstances,” Veen says.

The exhibit includes dresses that have stayed in families for years.  “We have one exhibit of four generations, and we have another of three generations…and even though the dress may not have reused the dress in a wedding, they’ve kept it as a family heirloom,” Veen says.

“These are items that our members have kept packed away. And this is probably the first and only time the public will be able to see them.”

The exhibit is open Thursday through Saturday from 10 a.m. until 4 p.m. at the State Genealogical Society in Des Moines. A $5 donation is requested at the door.