You are here: Home / News / Lead shot to be allowed for mourning dove hunting season (audio) 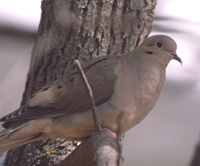 The governor has used his authority to veto a state agency rule so dove hunters will be able to use lead ammunition in September when the dove hunting season opens.

The governor’s Natural Resources Commission, after its chairman checked with Branstad, voted last summer to ban lead shot, as critics say the lead that doesn’t reach its target poses environmental harm to both animals and humans.

But then Branstad said he learned the Iowa House had voted against the idea of banning lead shot when the bill establishing a dove hunting season was passed in 2011.

“The law, I think, is pretty clear is that the responsibility of the Natural Resources Commission was to set the seasons, not determine what kind of shot can be used in hunting,” Branstad said this morning.

A legislative committee that reviews the regulations drafted by state agencies put a hold on the rule banning lead shot, giving the full legislature an opportunity to weigh in on the issue. The Iowa House voted to nullify the rule, but the Senate didn’t take up the issue — which means the ban on lead shot went into effect Thursday. Today Branstad used his authority to veto the rule.

“I believe it is important — not only on this issue, but on other issues — that we intend to abide by the law and not let administrative agencies exceed their authority and do something beyond what the legisalture has delegated to them,” Branstad said. “The determination of whether hunters should be forced to stop using traditional shot is something that should be decided by the legislature, not by administrative fiat.”

Senator Dick Dearden, a Democrat from Des Moines, is a long-time backer of the move to allow dove hunting in Iowa,. Dearden attended the ceremony Branstad held to sign the executive order vetoing the ban on lead shot.

“I’m just happy with the result, not necessarily the process,” Dearden told reporters.

The Iowa House voted this past February to allow lead shot for dove hunting but the Senate never took up the measure. Dearden is unwilling to say whether the senate’s inaction on the issue was intentional or accidental. Dearden intends to hunt doves in Iowa this September, using lead shot.

“Absolutely,” Dearden said. “You know, if you’re walking across a field pheasant hunting and a dove comes over, you don’t have time to change shot..The lead thing is more anti-hunting. It’s a way of, ‘if we make is more and more difficult to hunter, there’s going to be less and less hunters.'”

Earlier this year the Sierra Club’s Iowa chapter filed a lawsuit to try to get a court to uphold the Natural Resources Commission’s decision to ban lead shot and require “non-toxic” steel shot for the dove hunting season.

“Not sure you can air my thoughts,” Neilla Seaman, a spokeswoman for the group, quipped when asked by Radio Iowa for her reaction to Branstad’s decision. “I’m very disappointed that this is happening like this.”

“You know, he said it was up to the legislature to make the decision about how to proceed with this and when he didn’t like what the legislature did — which was the Senate did nothing — now he’s issued an executive order that rescinds the ban on lead ammunition for hunting mourning doves,” Seaman said.

Governor Branstad argues his veto of the Natural Resources Commission rule makes the Sierra Club’s lawsuit “moot.” Seaman says she’s consulting with a lawyer to determine what the Sierra Club’s next step will be.