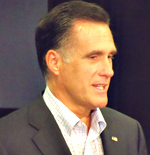 The front runner for the Republican presidential nomination is due in Iowa Tuesday. Mitt Romney is set to deliver what his campaign is calling a “major policy speech” at Drake University in Des Moines.

The Republican Party organized a conference call this morning with a couple of prominent G.O.P. elected officials in the state to preview Romney’s visit. Iowa Congressman Steve King said when Barack Obama took office, the national debt was $10.626-trillion.

“Our debt was 80% of the (Gross Domestic Product) when he was elected. The debt is 105-percent today,” King said. “To give you an example, Greece is at 152% now and if you project Barack Obama’s $1.33 trillion (added debt) per year…we’re going to be approaching the conditions in Greece if we have a second Obama term.”

“The sustainability of federal revenues coming to the states is a big problem and it has really grown over the past few years during the Obama administration. Eventually, the federal government will either choose to decrease its spending or, like Greece, it’s going to be forced to cut its spending. Either way, when that happens, Iowans will be directly impacted,” Vaudt said.

Details on the exact time and location of Romney’s speech in Des Moines tomorrow have not been released. It will be his first visit to Iowa since the G.O.P. caucuses.

The Obama campaign released this response:
“Mitt Romney knows a lot about out-of-control spending and debt- it was his record in Massachusetts. During his four years as governor, state spending increased by 6.5% per year, government jobs grew six times as fast as private sector jobs, taxes and fees went up by $750 million each year, and debt increased by 16%. In fact, he left Massachusetts with the largest per-capita debt of any state in the country. Now, while President Obama has a plan to reduce the national debt by $4 trillion, Mitt Romney’s would give $5 trillion in tax breaks weighted to millionaires and billionaires at the expense of the middle class—without saying how he’d pay for it. Helping the wealthiest prosper by any means necessary, even if it means undermining workers and middle class families, was Mitt Romney’s record in the public and private sectors and it represents the values that he’d bring as President.” –Erin Seidler, campaign spokeswoman