You are here: Home / News / Romney says Obama’s policies are “old” rather than “bold” (audio) 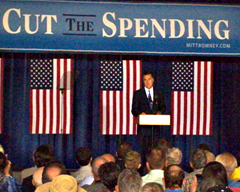 Mitt Romney, the Republican Party’s likely presidential nominee this fall, used a speech this afternoon in Iowa to blast President Obama as an “old-school liberal” whose economic polices are damaging the country.

“What President Obama is doing is not bold,” Romney said. “It’s old.”

Romney suggested Obama has put off critical decisions about government spending and debt.

“A prairie fire of debt is sweeping across Iowa and across the nation,” Romney said. “…This is not solely a Democrat or a Republican problem. The issue isn’t who deserves the most blame. The issue is who is going to do what it takes to put out the fire.”

Romney promised the crowd he wouldn’t shy away from so-called entitlement reform, meaning changes for Social Security, Medicare and Medicaid. And he pledged to make the U.S. government “smaller, simpler and smarter.”

“I will lead us out of this debt and spending inferno,” Romney said. “We will stop borrowing unfathomable sums of money we can’t even imagine from foreign companies we’re never even going to visit. I will work with you to make sure we put out this spending and borrowing fire.”

Standing under a banner that said, “CUT THE SPENDING” Romney suggested the “kitchen table values” of the heartland would guide a Romney White House.

“These aren’t the values that lead to out-of-control spending sprees or to piling up debt that you know your children and your grandchildren will have to pay off all the days of your lives,” Romney said.

The appearance was staged in the same room where Romney spoke on Caucus Night. The speech marked Romney’s first visit to Iowa since the Caucuses. Brian Kennedy, Romney’s Iowa campaign chairman, told reporters the economy will be a drag on President Obama’s reelection campaign, even if economic signals improve before November’s election.

“I think folks have given up hope that much will change over the next few months, sadly,” Kennedy said. “Barack Obama simply hasn’t done what’s necessary to turn this economy around.”

Three Iowa GOP officials who created a ruckus at a recent national meeting by refusing to sign a pledge to support Romney in the general election all attended Romney’s speech this afternoon. Iowa GOP chairman A.J. Spiker, a Ron Paul backer, and Steve Scheffler, one of Iowa’s representatives on the Republican National Committee, stood near the back of the room. Kim Lehman, Iowa’s other representative on the RNC, endorsed Rick Santorum before the Caucuses and she attended Romney’s speech as well.