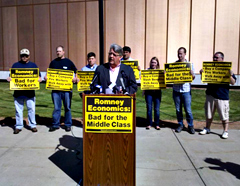 A coalition of groups blasted Mitt Romney’s business record in a press conference this morning in Des Moines.

Iowa AFL-CIO President Ken Sager said Romney, as an executive at Bain Capital, turned a hefty profit by raiding companies, laying off workers and forcing them into bankruptcy.

Sager said Bain purchased the clothing store chain Stage for $5 million, but made $100 million on the deal before Stage went bankrupt. Stage stores in 11 Iowa towns were closed.

“The bankruptcy occurred in 2000 and all these stores in Iowa were shut down in 2000 and 2002,” Sager said. “Those are not the kind of economic policies we want to see established here in Iowa or across the nation.”

Romney, the likely Republican nominee for president, is due to speak about the federal deficit this afternoon at the Hotel Fort Des Moines. Sager said Romney’s economic policies would hurt many Americans. “This election draws a clear contrast between Mitt’s vision for the economy, which is very familiar and troubling to us,” Sager said.

“It’s more budget busting tax cuts for the wealthy and fewer rules for Wall Street. This is the same formula that crushed our economy in ’08. It punished the middle class.” Sager said it’s “ironic” that Romney is worried about the national debt when he “loaded up companies with debt” while working for Bain Capital.

“Most American find something wrong with that, but Mitt seemed to be okay with that. As long as he got his paycheck, he didn’t seem to have a problem with hurting hard working, middle class Americans,” Sager said. There were several other speakers, in addition to Sager, at the press conference this morning.