You are here: Home / Fires/Accidents/Disasters / Bike ride pays tribute to those who have died 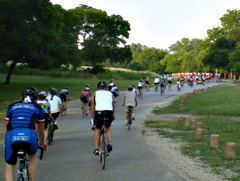 Hundreds of bicyclists in at least a half-dozen Iowa cities will gather and ride their two-wheelers in a slow line tonight as part of the Ride of Silence. Scott Sumpter, organizer of the Des Moines ride and founder of BikeIowa.com, says it’s a solemn tribute.

“The ride exists so we can ride in honor and pay respect to those who have been injured or killed while cycling on public roadways,” Sumpter says. Since May of last year, five bicyclists have died on Iowa’s roads and 16 were injured.

Those 21 names will be added to a list of more than 160 people who’ve been killed or injured while biking in Iowa in recent years. He says it’s an unfortunate fact that cyclists aren’t always respected by careless motorists.

“Every year, we see bicycling grow but we also see a few people get hit and killed,” Sumpter says. “We’re out there to raise awareness that the cyclists have the legal right to ride the roads.” Rides of Silence are being held in more than 300 American cities tonight and in 18 other countries.

Sumpter says the bike riders will only be rolling along at maybe 10 or 12 miles an hour, and in many cities, with a police escort.

“Every ride is supposed to start at 7 P.M.,” Sumpter says. “It’s just a silent procession, a really slow ride. It’s almost like a funeral-like procession.”

Rides are being held in cities including: Ames, Cedar Falls, Des Moines, Mason City, Woodward and in the Omaha suburb of Bellevue, Nebraska. Most of the rides will only go between four and ten miles in distance. Learn more at: www.rideofsilence.com