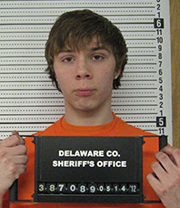 Marco is a 9-year-old Belgian Malinois. He’s one of seven Cedar Rapids Police dogs. Marco’s handler, officer Al Fear, says Isaiah Sweet was armed with a knife but surrendered without a fight once police spotted him in the woods.

“His first statement to me when I got him in handcuffs was, ‘I knew it was over when I heard the dog coming,'” Fear said. Sweet is now behind bars, charged in the shooting deaths of his grandparents in their home in Manchester. Marco played a critical role in another incident on Tuesday.

Officer Fear and his dog were the first to report to the scene of a large fight. “There were 40 to 50 people, several with baseball bats, fighting in the street,” Fear said. “Marco helped me just by being there because it was me with 40 other people – all pretty angry and violent.”

From a very public manhunt to a massive brawl, Fear believes this week revealed a problem in Cedar Rapids that deserves attention. He notes the police department has the same number of officers as it did back in 1990.

“We definitely need more officers in our department, not only more officers, we need more dogs to keep our community safe,” Fear said. Police dogs cost around $12,000 and are paid for with donations. A K9 fundraiser is set for June 2nd (from 10:00 am to 6:00 p.m. at Pet’s Playhouse on Jacolyn Drive Northwest) in Cedar Rapids.

All the funds are directed toward the care of K9s in the Cedar Rapids Police Department and the Linn County Sheriff’s office.